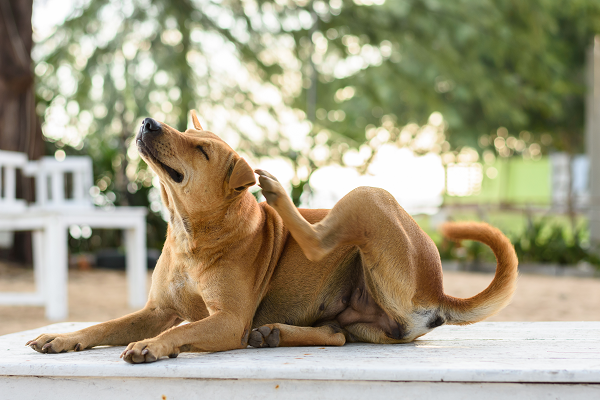 Leishmaniasis is a disease caused by a protozoan (single-celled) parasite found in dogs, cats, and certain rodents in many parts of the world, most commonly in rural areas. The parasite is transmitted by small biting sand flies. It is an important disease to be aware of because humans can also contract leishmaniasis.

“It is an important disease to be aware of because humans can also contract leishmaniasis.”

Leishmaniasis can cause one or two types of infections - a cutaneous (skin) infection and a visceral (organ) infection. Leishmaniasis is common in the Mediterranean, the Middle East, South and Central America, and southern Mexico. It has also been reported in Oklahoma, Ohio, and Texas, and is commonly found in foxhounds in the United States.

What are the clinical signs of leishmaniasis?

Clinical signs of the visceral form include fever, anorexia (lack of appetite), weakness, decreased stamina, severe weight loss, diarrhea, vomiting, increased drinking and urination, and bleeding from the nose. About one-third of dogs will develop swollen lymph nodes and an enlarged spleen and will progress to kidney failure. Muscle pain, joint inflammation, and swelling of the testicles may also be present.

"About one-third of dogs will develop swollen lymph nodes and an enlarged spleen and will progress to kidney failure."

Clinical signs of the cutaneous form most commonly include thickening and hardening of the tissues on the muzzle and footpads, called hyperkeratosis. Many dogs will lose the pigment or dark coloring of these tissues as the disease progresses. Nodules or hard lumps may form in the skin and the coat often appears dull and brittle with areas of hair loss. The nails may grow long and curve abnormally.

Virtually all dogs that acquire leishmaniasis will develop the visceral form of the disease. Ninety percent of those dogs will also have cutaneous involvement. The cutaneous form of leishmaniasis more commonly affects cats.

There are four classified stages of leishmaniasis based on clinical signs and diagnostic tests:

Stage 1: mild disease with little or no changes seen in blood work.

Stage 2: moderate disease with antibodies seen in the blood along with elevations in protein and mild anemia. Signs include skin changes, weight loss, and bleeding from the nose.

How is leishmaniasis in dogs diagnosed?

Leishmaniasis is diagnosed based on a dog’s medical and travel history (especially travel to an area with endemic leishmaniasis) and clinical signs. Blood and urine tests are usually performed along with tissue biopsies. Occasionally, the organism can be found on aspirates of lymph nodes or smears made from skin lesions, but these are not very sensitive. A PCR blood test can be sent to a laboratory. This test has the best chance of detecting leishmaniasis but is not 100% definitive. Antibodies may be seen in the blood, depending on how long the dog has been infected. General blood tests may reflect changes if specific organs are affected.

Is there any treatment for leishmaniasis in dogs?

"The goal of treatment is to resolve the clinical signs of leishmaniasis."

The goal of treatment is to resolve the clinical signs of leishmaniasis. There are many treatments available that are often used in combination. Sodium stibogluconate has been used but is difficult to obtain. Alternative treatments include meglumine antimonite (not available in the USA or Canada), allopurinol with or without domperidone, and marbofloxacin. Supportive treatments include intravenous fluids, special therapeutic diets, and antibiotics (if the skin lesions are infected). Solitary skin lesions can be removed surgically. Unfortunately, there is no cure and dogs may relapse.

What is the prognosis?

The prognosis for a dog diagnosed with leishmaniasis is guarded to grave. Many dogs die from the resulting kidney failure. Severely ill dogs may not be able to undergo treatment. Your veterinarian will provide you with specific treatment recommendations based on your dog’s condition.

© Copyright 2022 LifeLearn Inc. Used and/or modified with permission under license.