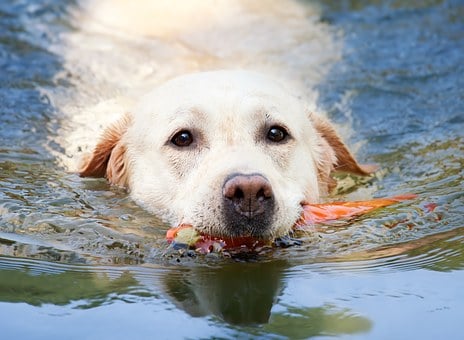 Pythiosis is the result of being infected by a water mold-like organism called Pythium insidiosum that is most commonly found in water, although it can also be present in soil. This organism can affect the gastrointestinal tract or the skin. Large breed dogs under six years of age are most commonly affected, perhaps because these dogs are most commonly involved in hunting or field trial activities in and around water.

"The most common sign of pythiosis is weight loss from gastrointestinal involvement."

The most common sign of pythiosis is weight loss from gastrointestinal involvement. These dogs can become emaciated (extremely thin). Vomiting and/or diarrhea may also occur. Often, affected dogs do not seem to be very ill until they have been infected for a long time. The skin form of pythiosis is characterized by ulcerating nodules that drain and then refuse to heal. Some affected dogs develop blockages in the gastrointestinal tract.

How did my dog acquire this disease?

Pythiosis is typically acquired by swimming in an area with Pythium zoospores.  High risk areas include swamps, bayous, or ponds, and the most common states affected are those bordering the Gulf of Mexico. That said, many other states have seen documented cases of pythiosis in dogs, including Oklahoma, Arkansas, Missouri, Kentucky, Tennessee, the Carolinas, New Jersey, Kentucky, Tennessee, Virginia, California, and Arizona. Other countries have also reported pythiosis, including Australia, Brazil, Burma/Myanmar, Columbia, Thailand, and Japan.

How are dogs with pythiosis treated?

The most effective treatment for pythiosis is the surgical removal of all infected tissues. If a limb is involved, amputation may be required.

Actively infected dogs may require hospitalization with intravenous fluid support and combination antifungal therapy, such as itraconazole and terbinafine, or intravenous amphotericin B. It is important for these dogs to receive high calorie, high digestibility food to counter the weight loss that typically occurs in pythiosis.

"Anti-fungal medication is generally given for 3 – 6 months to reduce the risk of recurrence."

What is the long-term expectation for my dog with pythiosis?

The prognosis for dogs with pythiosis is guarded to poor, and fewer than 10% of dogs are cured with medications alone. The outlook is somewhat brighter if all affected tissues can be removed surgically.